To coincide with the 10th anniversary of ONE & OTHER, we’re in conversation with Sir Antony Gormley about the power of participation, the rise of reality TV and how we can make art in a time of enormous instability.

Whether life-size, 54 metres wide or abstracted into blocks, Gormley’s works examining the human form have become some of the most instantly recognisable sculptures of our generation. He has put figures everywhere: gazing out to sea at Crosby Beach, stranded in the dry expanse of Western Australia, sitting atop sky scrapers in Manhattan, outstretched beside the A1 motorway and living and breathing on the Fourth Plinth in Trafalgar Square.

This month, we’re marking 10 years since Artichoke was invited to produce his Fourth Plinth commission in 2009. The idea was simple, every hour for 100 consecutive days and nights people took to the empty plinth in Trafalgar Square for one hour each to dance, protest, undress, sing or simply do nothing. In a total reinvention of the idea of a plinth as a stage for lifeless memorial, ONE & OTHER put British people in the limelight to create a living portrait of the UK in the 21st century: brave, funny, dependant, vulnerable, bored, angry and plenty in between. The 2,400 ‘plinthers’ who took part were anonymously selected from 35,000 people who applied from all corners of the UK and Sky Arts ran a continuous live stream of the work in what was the longest broadcast of its time.

Why did you decide to make ONE & OTHER as your Fourth Plinth commission?

Very early on in the development of the Fourth Plinth project I got a call from John Mortimer -who originally devised the idea of a rolling programme of temporary artworks -and he offered me William IV’splinth, butI wasn’t interested in taking on some old bit of early 19thcentury street furniture. I said, ‘give me the whole of Trafalgar Square and then we do something worthwhile’, but that wasn’t in his gift, so I declined. After the project had been going for nearly 10 years, I was approached again and this time I thought that perhaps there was a way of turning the plinth to another purpose. What does a plinth imply? It implies that the elevated image that sits atop it is an example which stands above everyday life, raised high in order to be a moral principle or a memorial of some hero, but I guess we just don’t believe in any of that any more. I certainly don’t. So I started thinking about how I could use that idea in a democratic world in which we recognise that everybody has moments of heroic fortitude and everyone is worthy of being thought of as an example, an example of what a human being can be and do.

How does ONE & OTHER as a project fit into your wider practice as a sculptor?

To begin with I thought about the commission in the manner of that question, how many people can you get inside an old telephone box? I wondered if we could scan and cast as many people as possible – maybe 35 –  and get 35 body forms up there. So, still sculptural. Then I wondered whether the eternal values of sculpture were less interesting than people. That was the revelation. No monument in metal or stone, but a monument in time. The work had to be about us, now, and not a memorial looking backwards but looking forwards. 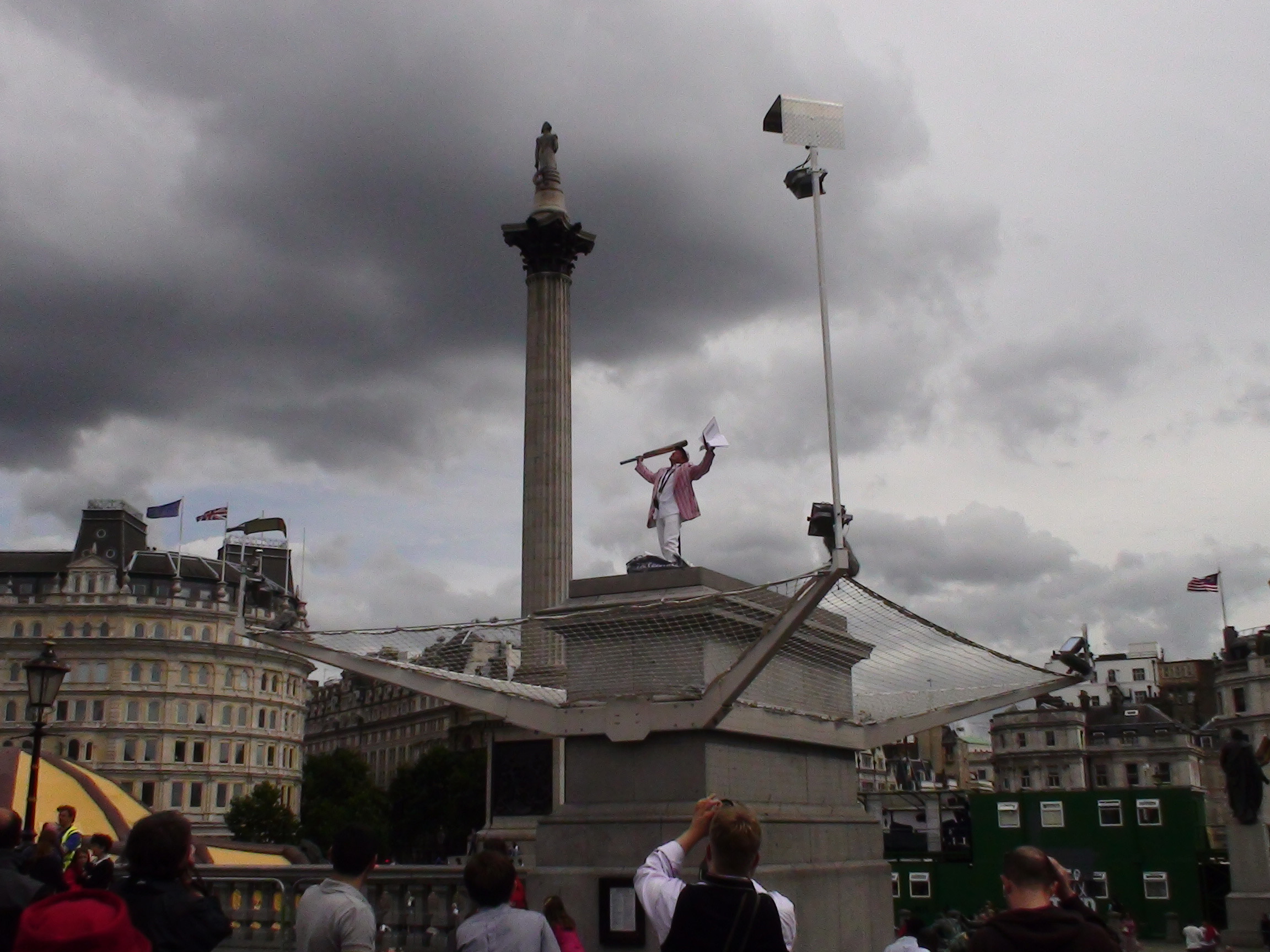 As social media, reality television and self-made fame have grown over the past 10 years, do you think that a project like ONE & OTHER would work now in 2019?

You mean after Love Island and The Jeremy Kyle Show? ONE & OTHER did work in the same idiom as reality TV, but of course its effect was very different. The things that worked best were not prepared performances but people being on the plinth in the simplest way, looking out from 8 metres above the Square, observing from the plinth and being observed. The participants became the subject of other peoples’ observation. While the work seemed to play into the language of reality TV, there was no overt competition, no comparison, simply a continuous sequence of 2,400 individual exposures. Having said that, it’s very important that ONE & OTHER used the extension of collective space provided by the internet and the live 24-hour streaming was vital, multiplying the numbers who experienced the work. 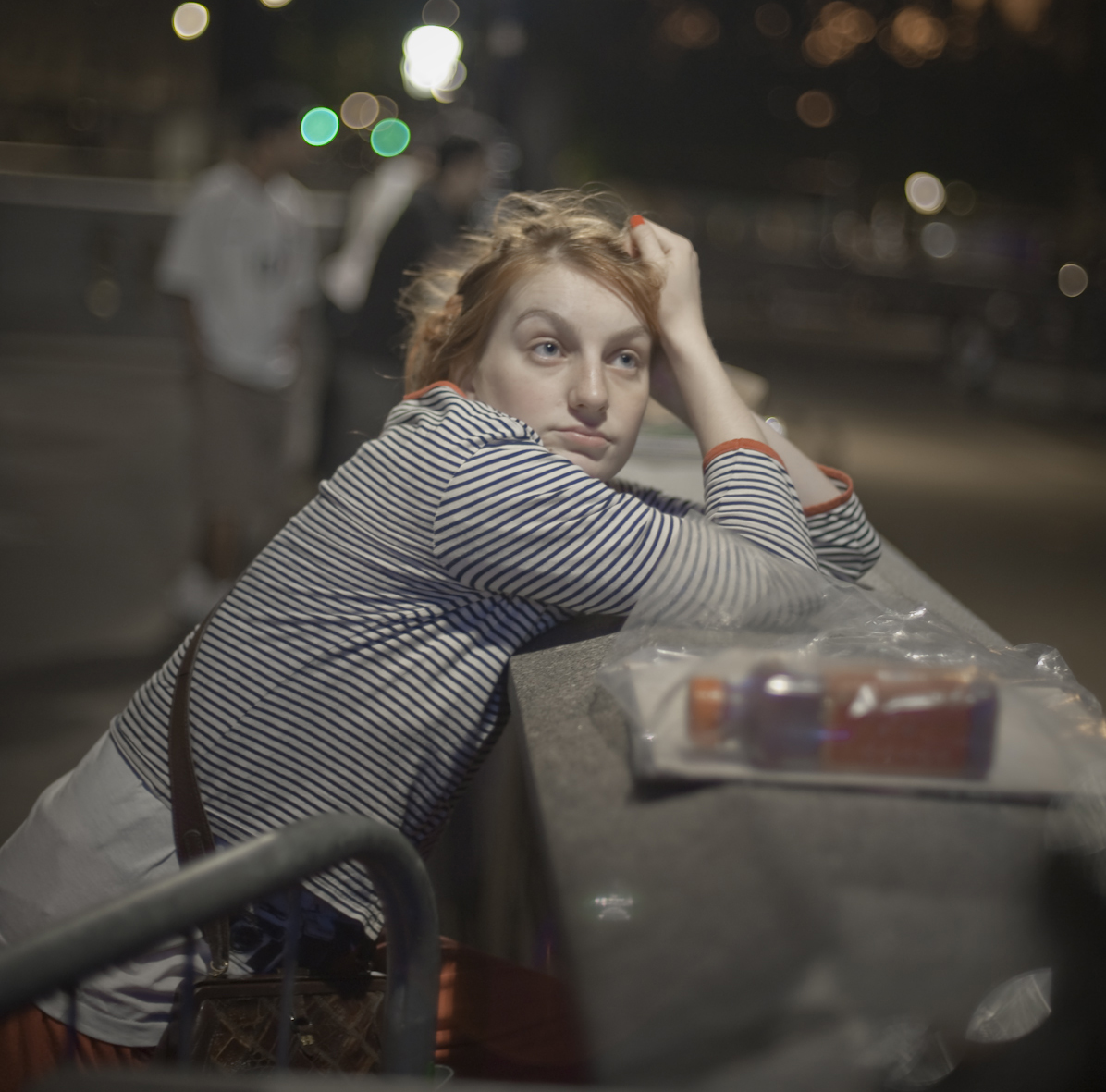 Many of your works, including ONE & OTHER, have moved people who may not be interested or who potentially have felt alienated by modern art. Why do you think that people have connected to your works in this way?

Because it deals with life. It’s one of the tragedies of our time that art has become an inward-looking specialisation. I feel very, very strongly that art and particularly sculpture that can exist anywhere in public can be a place in which we think about life, not just art. I want to deal directly with life, and I want the work to exist in life. I think people respond to that.

Because along with the specialisation of the language of art, the idea of being an artist has also become a specialism and I think that is denying one of the truths about art. Last year I made a film called How Art Began which involved a pilgrimage to look at works made by early humans in caves in France, Spain, Indonesia and Australia. The paintings in the caves are of animals that our ancestors at that time evidently held in high regard, whether horses, bison or reindeer. They communicate a sense that everybody understood drawing, that drawing was like speaking or singing, that everybody did it. If you think of all of the great examples of art that has lasted, Stonehenge, the pyramids, or gothic cathedrals, none of them were made by individuals. The Great Pyramid of Cheops in Egypt was made by thousands of bodies over thousands of hours, it was made by life. In the past art was collectively made and collectively owned. Art belongs to everyone, is for everyone, can represent everyone and can be made by everyone. 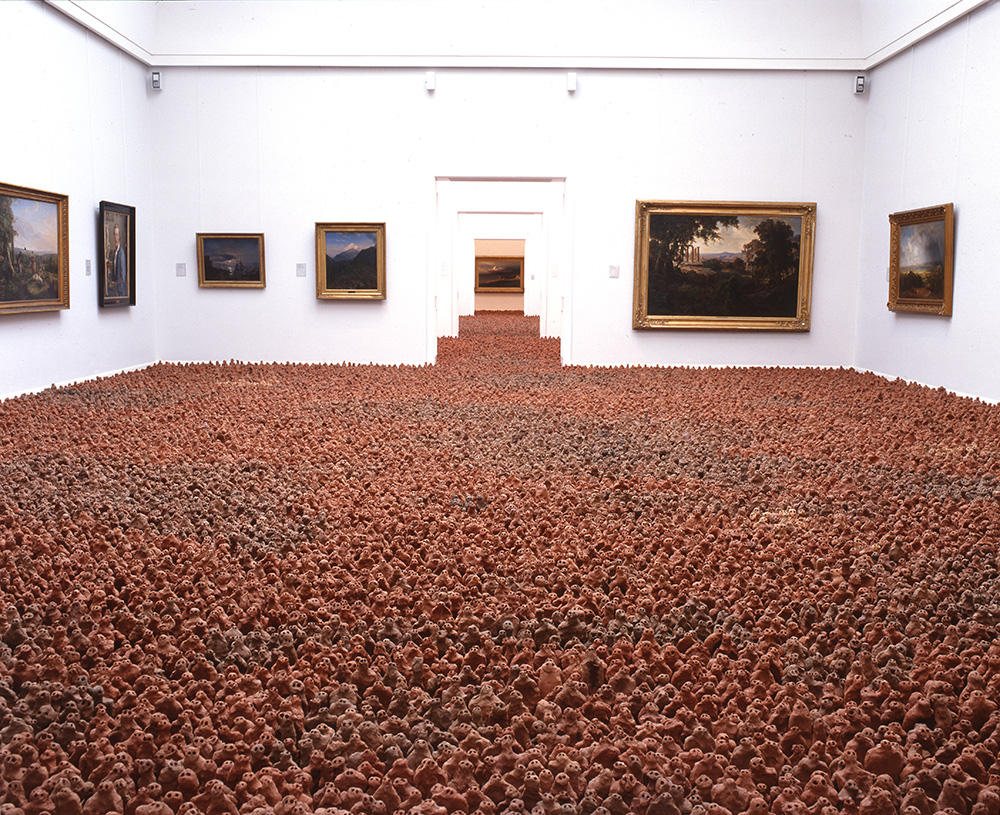 Did ONE & OTHER influence the way you think about participation? And would you consider inviting people to shape your work in this particular way again?

For Inside Australia and Domain Field, people were invited to bring their bodies for each of their individual identities to be celebrated as part of a composite picture of a collective community or a collective body. I am still interested in this idea. In 2012 I worked on Survivor with Hofesh Shechter Company and we collaborated with 200 children who we taught to drum and incorporated them all into the production. I’m interested in collective performance, so in the future I might take up the potential of ONE & OTHER, but in a performative way. 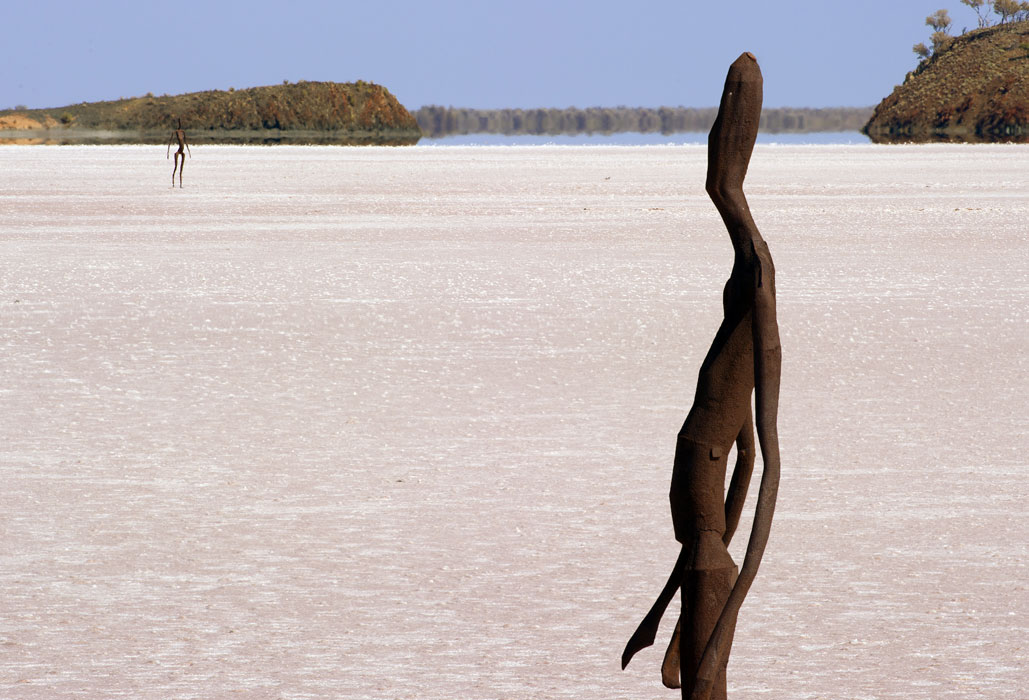 Did you have a favourite moment of ONE & OTHER?

The project is a whole, so I don’t like singling out specific examples but, generally, the less planned the hour, the more I liked it. The more it was a response to the vertigo of being up at that height and the exposure, the more I liked it. I was very moved by a lot of the participants. I applied three times but never got through -but that was part of the game. I have great respect for the people that did it. I think it took courage and also conviction. I was a very small part of the whole thing.

What gives me enormous inspiration is that hundreds of people can come together to make a focus for reflection. Who are we? Where are we going? What do we care about? What are the signs by which we lead our lives? The work asked all these questions. The remaining physical records, like the book and the archive, are only part of its legacy. The memory is embedded in me and I feel very emotional when I think about it and that’s true, too, for many of the ‘plinthers’.

The work hinged on the idea of being alive now in the present moment. How do you feel about the way that ONE & OTHER was recorded?

I think it’s a fantastic thing that The British Library digitally archived the project website and that the Wellcome Trust recorded the details of all involved and went on to make an oral history archive with a group of ‘plinthers’.

This fragile event in time, full of joy and witness, fear and self-exposure, became a millennial monument that is completely immaterial and yet it is embedded in our memory. It is full of hope for the future.

That remains for me the personal legacy of the project: can we make sculpture that is about making the future possible in a time of enormous instability and division? That danger comes from the changing climate, the division between rich and poor and the restlessness of our world expressed in the tourist as much as in the migrant. This project is an example of how people can come together and think collectively in common space about what our common future might be.

We’ve had a very positive reaction to our 10-year anniversary social media posts and lots of people have shared their memories, either of seeing the project in action or of being up on the plinth themselves and there’s definitely still a community of ‘plinthers’ and feeling of togetherness. What was your personal interaction with the ‘plinthers’ during the project?

Well, I went down as often as I could -often late at night -and I would go and talk to them, either before they went up or after they came down. There was a very, very special feeling on Trafalgar Square throughout the 100 days and I remain enormously grateful to Artichoke for the care and the emotional intelligence that they applied to the project. Basically, it was 2,400 individual encounters, or performances, or exposures of personal life to collective gaze. It was very important that every single ‘plinther’ felt that their contribution was precious and an essential part of this endless chain of life moments. The atmosphere in the reception centre on the Square was critical because as nervous people arrived, sometimes with quite complicated props, they needed to be held and made to feel comfortable and feel that their contribution was valued and purposeful. It was moving in many ways, not  just the performances -which were often extraordinary -but also the way the project animated the empty Square or the crowd. It could be 3 o’clock in the morning, pouring with rain, with somebody up there talking about their lives in a way that was closer to the psychoanalyst’s couch than to any public performance, but people watched from all over the world and were attentive. I still remember the man who talked about losing his wife to cancer and his feeling of bereavement, not just of the person that he loved, but the loss of what his life meant.

What I continue to take from ONE & OTHER is to try to shed our obsession with memorial and try instead to create a place in which the future can be thought about and hopefully generated.