14th – 17th November 2019. With one year to go before the UK’s largest light festival returns to illuminate Durham City’s iconic landmarks and its lesser-known cobbled corners, it’s time to save the date.

Lumiere Durham was originally planned as a one-off event in 2009, but the poignant union of architecture and leading contemporary light art has transformed it into a biennial event and a cultural highlight in the North-East calendar. Today marks one year until Lumiere returns to illuminate Durham, animating its iconic landmarks and its lesser-known cobbled corners in November 2019. This anniversary edition will bring back some old favourites as well as an array of stunning new works guaranteed to transform the dark winter nights. Expect dazzling large-scale projections, interactive creations and mind-blowing installations alongside several quieter, more contemplative artworks.

Can’t Wait? Get a Glimpse of Lumiere now.
To mark one year until the festival, a permanent piece of light art has been unveiled to illuminate the Durham skyline. Heron by Plymouth born and South of France based artist, architect and sculptor, Jon Voss is a legacy of Lumiere Durham 2017. A homage to one of our most magnificent English birds, the softly luminescent Heron spreads its majestic wings along the banks of the River Wear to celebrate the beauty of nature in the heart of the city. 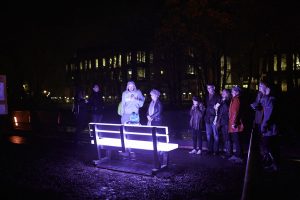 If you look around Durham you will find other reminders of past Lumiere festivals scattered across the city, subtly changing the way that the everyday surroundings are experienced. Lightbench by German artist Bernd Spiecker is lit by hundreds of LEDs and it reinvents the notion of public seating. This unique resting point was part of Lumiere 2015 and can be found permanently overlooking the River Wear at Freemans Reach. In Millennium Place, Helevetictoc, created by the Swiss jazz drummer turned software engineer, Tobie Langel projects the time in words as a permanent public clock. The installation featured in Lumiere 2011 and 2015. It wittily uses language in the iconic typeface to recall a pre-smartphone era of asking strangers for the time.

Lumiere 2019 Programme
Programming for Lumiere Durham 2019 is now underway and you can be the first to find out the latest by subscribing to our newsletter. You can also keep up to date on our latest news by following Artichoke on Twitter, Instagram and Facebook.

Ticketing Information
As ever, Lumiere will be completely free. Tickets will be available in 2019 and more information will be released nearer the time. 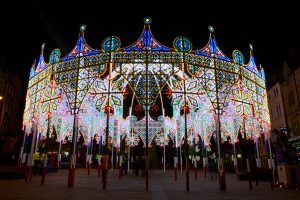