A unique theatrical experience down the rabbit hole

Hillary Westlake’s immersive production Dining With Alice brought diners up close with the cast of characters from Lewis Carroll’s masterpiece.

Curiouser and curiouser…don’t you agree?

A theatrical experience with a difference. Dining with Alice served up an enchanting Victorian feast in the grounds of a manor house.

Over eight nights, guests were served a four-course meal outdoors by a team of turban-wearing volunteers. Imaginatively-named dishes including ‘Mock Turtle Soup’ and ‘The Pie of Hearts’ were on the menu, specially created by Bompas & Parr in association with students from City College Norwich.

Transported into Lewis Caroll’s imaginary world, this immersive piece of theatre brought unexpected moments from well-loved characters: Alice running through the trees; the screaming Queen of Hearts; the anxious White Rabbit. The performance culminated at nightfall with a musical finale under the stars. An epic production in a beautiful setting, Dining With Alice turned audiences into honoured guests and breathed new life into a literary classic.

Dining with Alice revived an original production first performed in 1999 in Lamer Tree Gardens as part of the Salisbury Festival.

Hilary has worked all over Europe, Australia and parts of Asia and has extensive experience in running seminars and workshops for both professional and student performers, designers, writers and directors. She is frequently engaged as a creative consultant on films, corporate presentations and live performances. From 2003 to 2006 she was Creative Director of Entertainment at Disneyland Resort Paris.

In recent years Hilary has developed work with circus, street and other multi art-form performance and works regularly as mentor and facilitator with both emergent and established artists.

John began his career in sound in London’s West End working on productions such as Jesus Christ Superstar, Billy Liar and Jeeves. He designed the sound for the original Rocky Horror Show and has worked at The Royal Court Theatre, The Royal Exchange Manchester.

John has been Sound Designer for the Royal Edinburgh Military Tattoo for the past 20 years. After working on the Zoria Military Tattoo on Red Square, John was awarded the Kremlin Zoria Gold Plate. He has worked for Royal Families in the UK and abroad including Jordan and Saudi Arabia. His recent work has included working with Pimlico Opera in various prisons around the country with shows such as Les Miserables, West Side Story, and Some Like It Hot.

John previously worked with Artichoke on Hilary Westlake’s Dining with Alice and Crown of Light for Lumiere Durham in 2009, 2011 and 2013. In 2015 he worked on a new projection for the Cathedral, The World Machine. He is currently the sound consultant for Imagination whose major clients include BT, Canon, Rolls-Royce, Ford, and Lincoln. Currently, John is working on a project with Orlando Gough for Messums Wiltshire.

Lumiere & Son Theatre Company was founded in 1973 by Hilary Westlake and David Gale.

The company was based in London. Westlake directed the shows and Gale, with some exceptions, wrote them. Their work derived from protracted conversation about their mutual preoccupations, followed by focus on a theme or topic which Gale would develop into a performance text.

Clothes are Katy’s passion, her tastes are guided by the eternal truths of cut, colour and workmanship rather than seasonal fashion.

Spending time and working regularly with her I have found her inspirations to be as diverse as Caspar David Friedrich, Cornelia Parker, Grosz, Magritte, Caravaggio to Schiele, Goya to Peter Blake.

She is drawn to the details of fabric and stitching, but is equally expert in judging the impression that your clothes will make when you appear in front of 1000 people. She designs for an individual at every level, from the gym to the red carpet, and for every eventuality.

Simon Corder is an award-winning artist and designer who has created over 350 breath-taking installations all over the world.

His practice embraces lighting for performance, set and production design, light-art, zoo design, event production, lighting for exhibitions, and photography. He also designed the lighting for Fogscape #03238 by Fujiko Nakaya at Lumiere Durham 2015.

Frank Millward integrates the skills of a composer, researcher and artist in producing highly original work that provides insights and new ways of looking at and listening to the future. 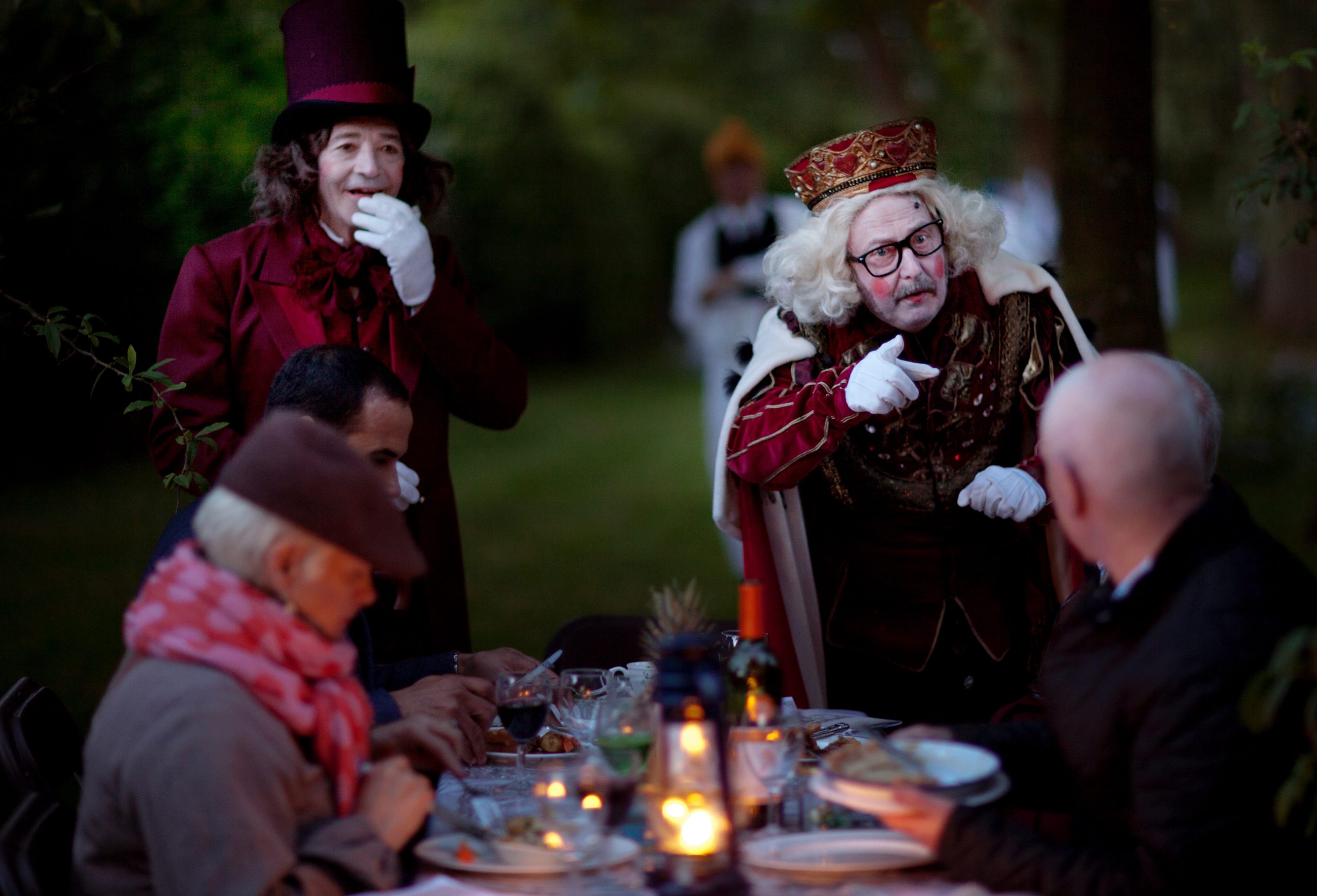 Dining With Alice: The Turban Team

Our incredible team of volunteers donned their turbans night after night to serve our audiences throughout their topsy-turvy dining experience. We couldn’t have done it without them.