Ordinary people in one of London’s most celebrated public spaces, one hour at a time

Commissioned by the Mayor of London.

Every hour, for 100 days and nights in 2009, people from around the UK took to the Fourth Plinth in Trafalgar Square to dance, protest, sing or simply do nothing.

For 100 continuous days and nights in the summer of 2009, Trafalgar Square was filled with the voices of modern day Britain, no two hours the same

Artichoke was invited by Antony Gormley to produce his major commission for the Fourth Plinth. The idea: to place 2,400 people from across the UK on the Plinth for one hour each. Positioned amongst the military statues of Trafalgar Square, the ‘Plinthers’ came to represent humanity itself. A living portrait of the UK in the 21st century, Antony Gormley’s concept put ordinary British people centre stage.

One & Other was open to anyone who was over the age of 16 living or staying in the UK. Over 35,000 people applied and participants were selected based on a geographical spread to ensure voices from all corners of the country were heard.

Thousands watched in Trafalgar Square as participants campaigned, performed, undressed or just sat on the Plinth. Sky Arts ran a continuous live stream of the living art work, in what was the longest broadcast of its kind. Clive Anderson presented 16 weekly TV updates on site.

The legacy of One & Other lives on. In 2010 Random House produced a 700 page book, including portraits of each Plinther. The British Library archived the project website and the Wellcome Trust recorded the details of all involved. Not only was it the event of the summer, it continues to provide a snapshot of British society.

One & Other was part of the 2009 Sky Arts Artichoke Season. 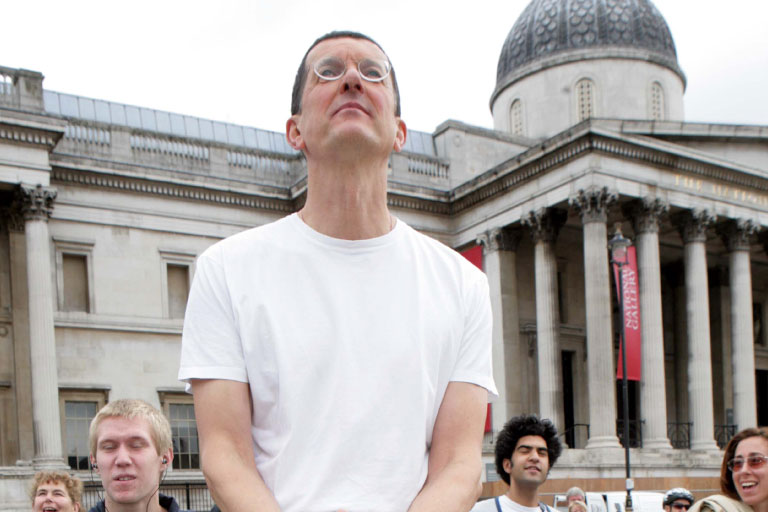 Born in London, Antony Gormley’s work has transformed traditional and unusual locations across the world, including galleries, beaches, fields and cities.

His most famous artworks include the Angel of the North in Gateshead, Another Place on Crosby Beach, and Event Horizon, an installation that has taken place in cities around the world including London, New York, Sao Paulo and Hong Kong.

ONE & OTHER, Antony Gormley, Fourth Plinth, London, 2009. Produced by Artichoke. Photo by Matthew Andrews.
The website was a key means of communication to participants and those who already knew about the project.

Provided by our sponsors, Sky Arts, the website featured a live feed of the plinth throughout the project, allowed participants to upload individual profiles, and enabled viewers to leave comments for the Plinthers.

The location was decided before Antony was commissioned, as part of the Fourth Plinth project. However, both the Plinth and Trafalgar Square were important to the ideas behind One & Other. The project aimed to reclaim the square – traditionally a place of military figures – for the public.

As Antony himself said, “The square has its history as a place of national identity. My project is about trying to democratise this space of privilege, idealisation and control. This is about putting one of us in the place of a political or military hero. It’s an opportunity to use this old instrument of hierarchical reinforcement for something a little bit more fun.” [Interview with Alastair Sooke, The Telegraph, 26 February 2009].

One & Other was an entertaining artistic process that showed us British society in all its forms. It could be (and was) read as many different things: a comment on reality television; a progression of Warhol’s prediction that one day everyone would have their ‘15 minutes of fame’. Perhaps it was both of these things.

One & Other, Anthony Gormley, 2009. Produced by Artichoke in partnership with Sky Arts. Commissioned by the Mayor of London for the Fourth Plinth with funds from Arts Council England. Photo by Matthew Andrews